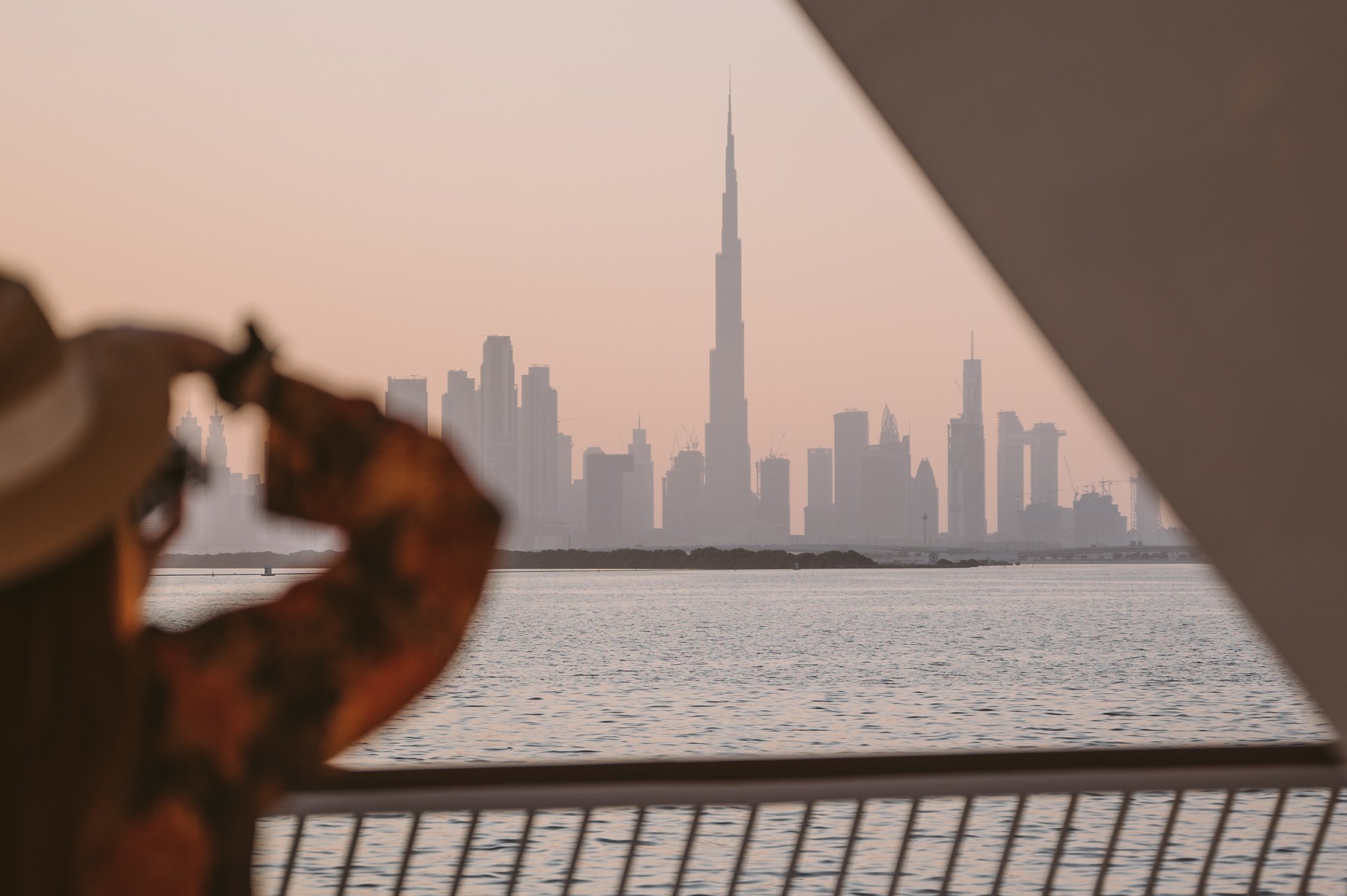 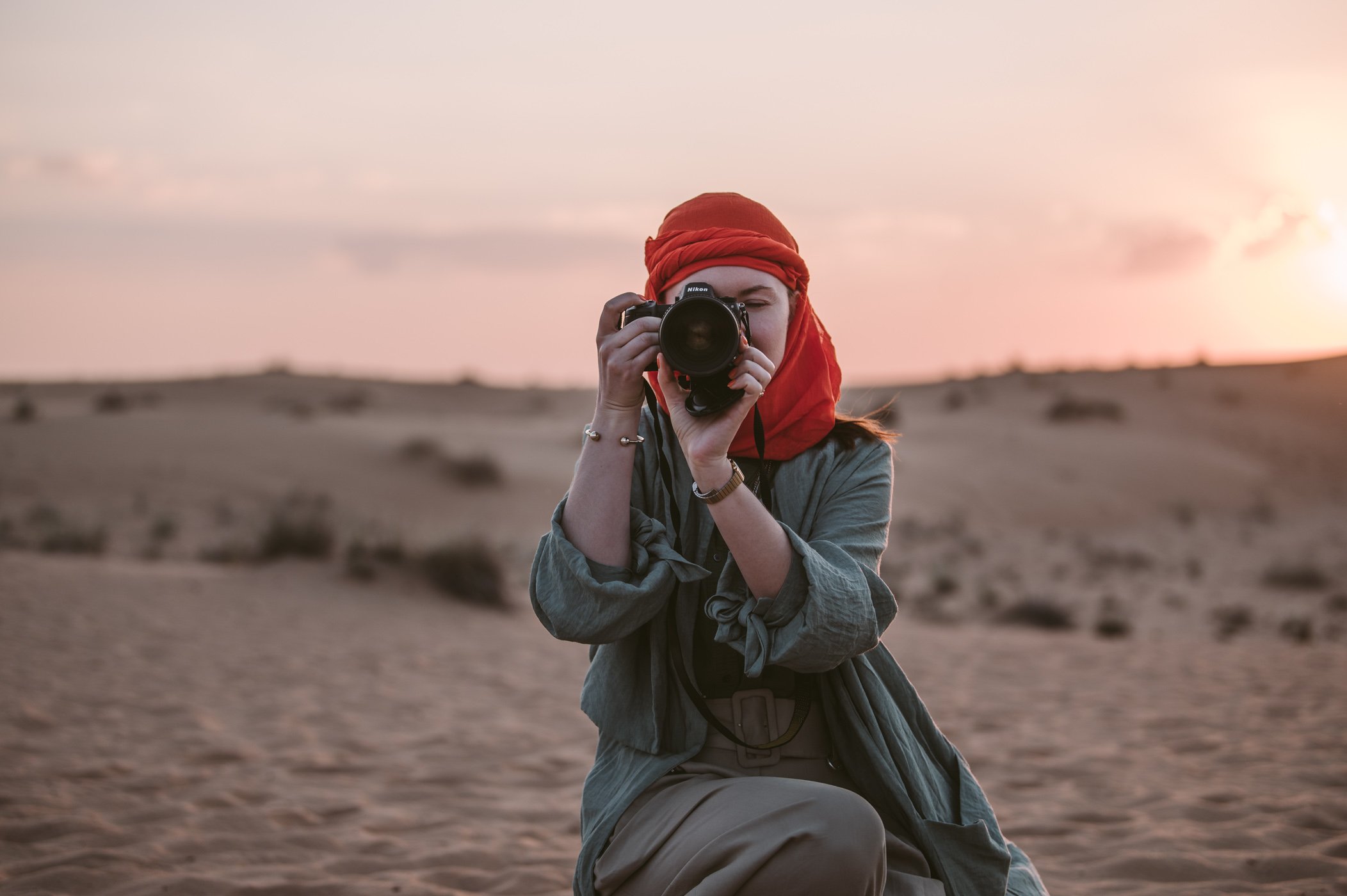 So why choose Dubai for our project you might ask? Dubai, this city of glitz and glam. This destination that usually only makes it into our social media feed by either images of “megalomania” (it still holds the records for world’s highest skyscraper) or selfies of well-retouched and filtered glamour queens. 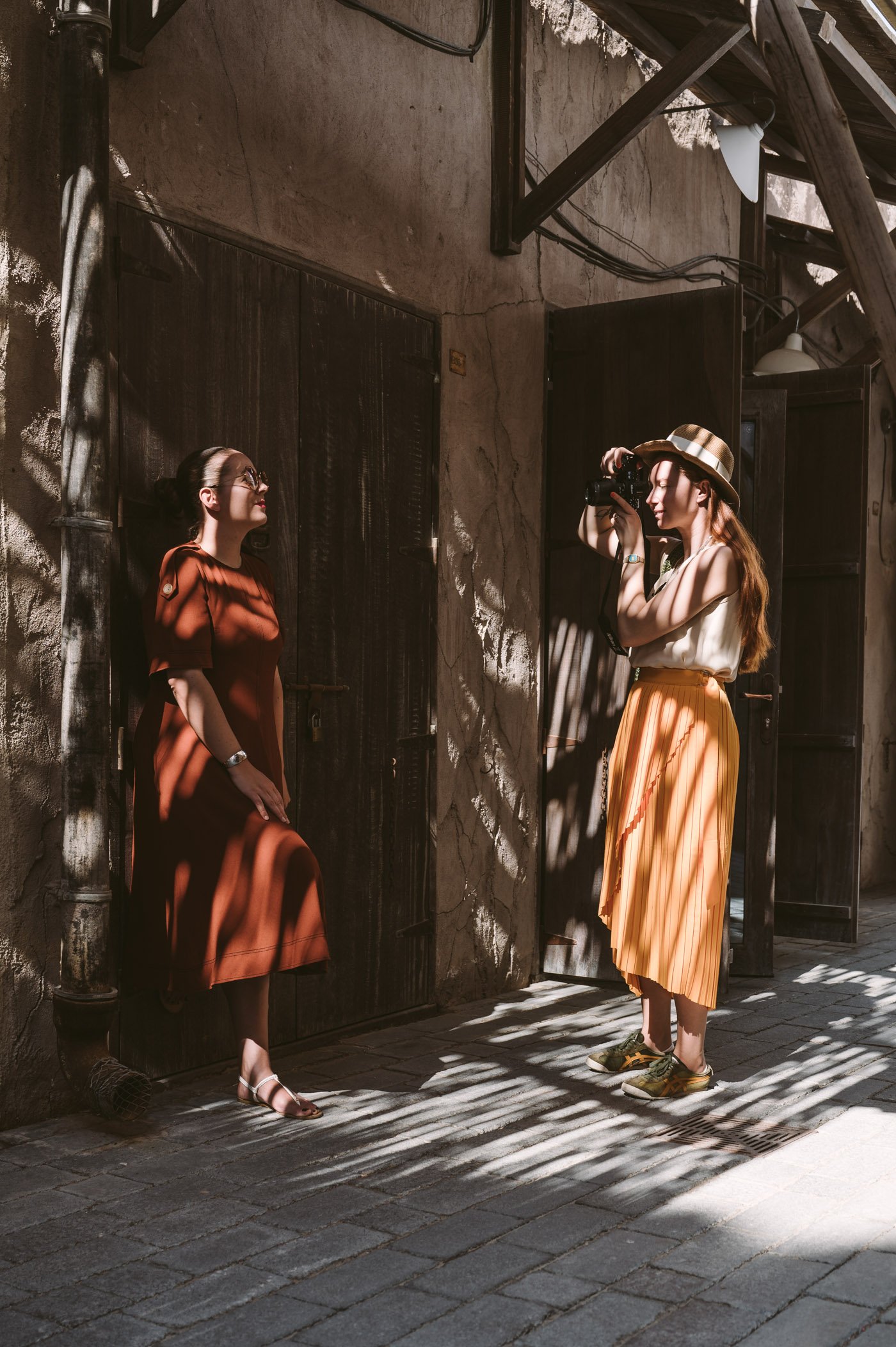 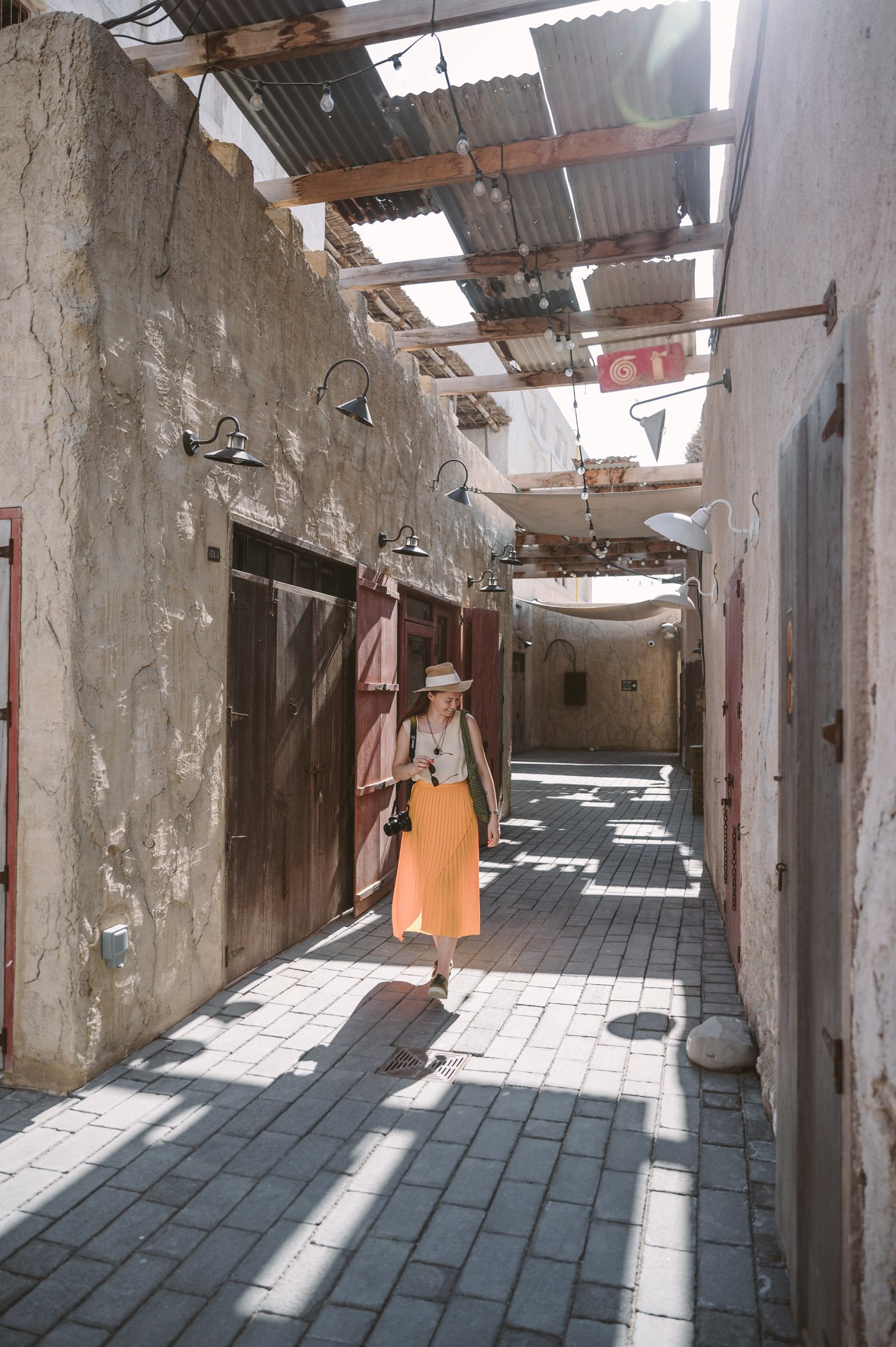 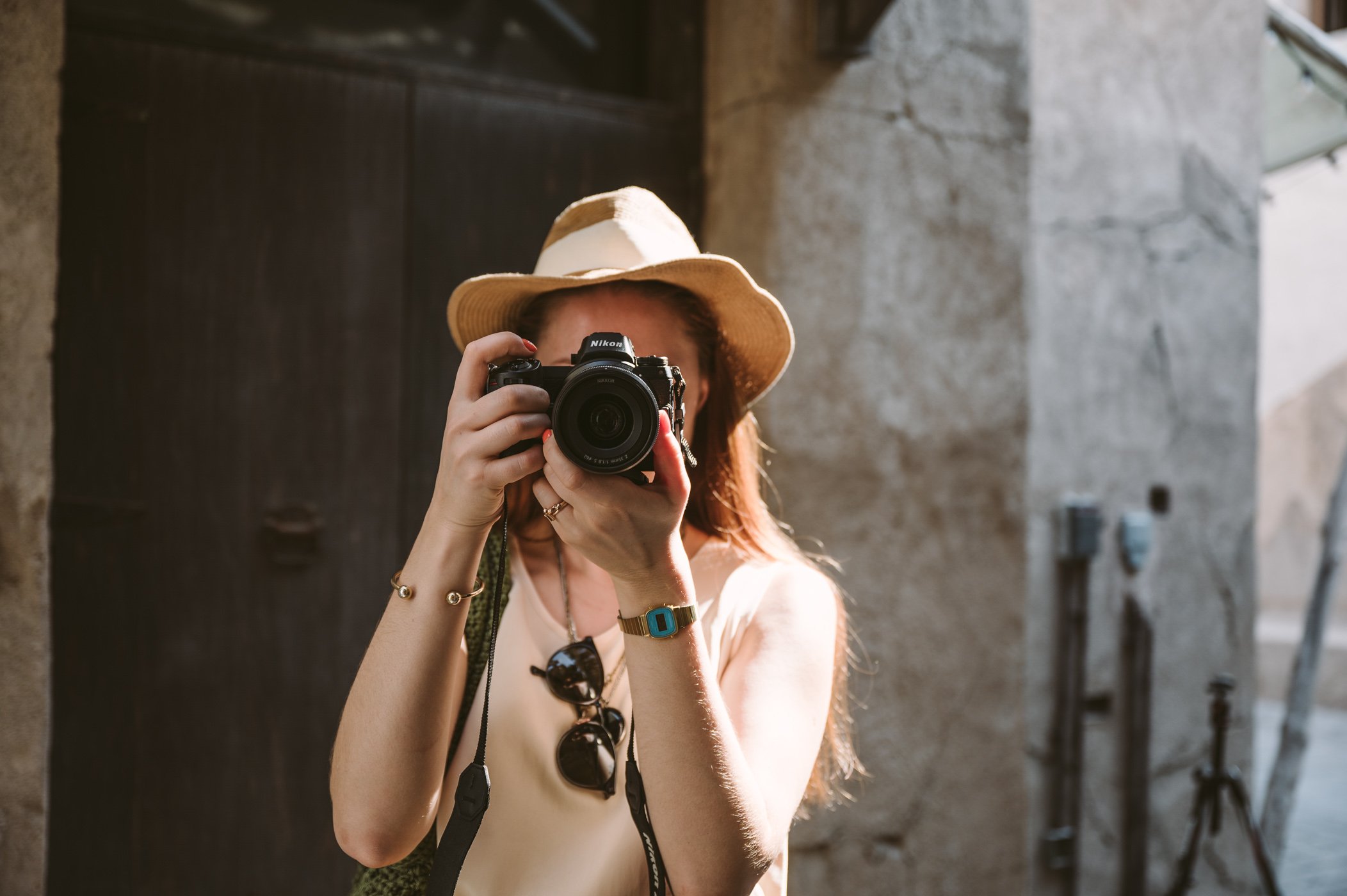 We chose Dubai to showcase a destination from different female perspectives.

I’m sure you can already take a wild guess. These images are exactly what we thought needed to be contradicted and balanced out by other viewpoints. Therefore Alina Rudya – who founded Bell Collective – and I went to Dubai and explored the destination a bit differently. We are lucky to have a partner like Nikon on our side, who not only supports female photography, but also lets us create our stories completely independently.

Our goal was to not only show our point of view as female photographers in Dubai, but also meet local Emirati women to portray them, get to know them and exchange our ideas about womanhood. 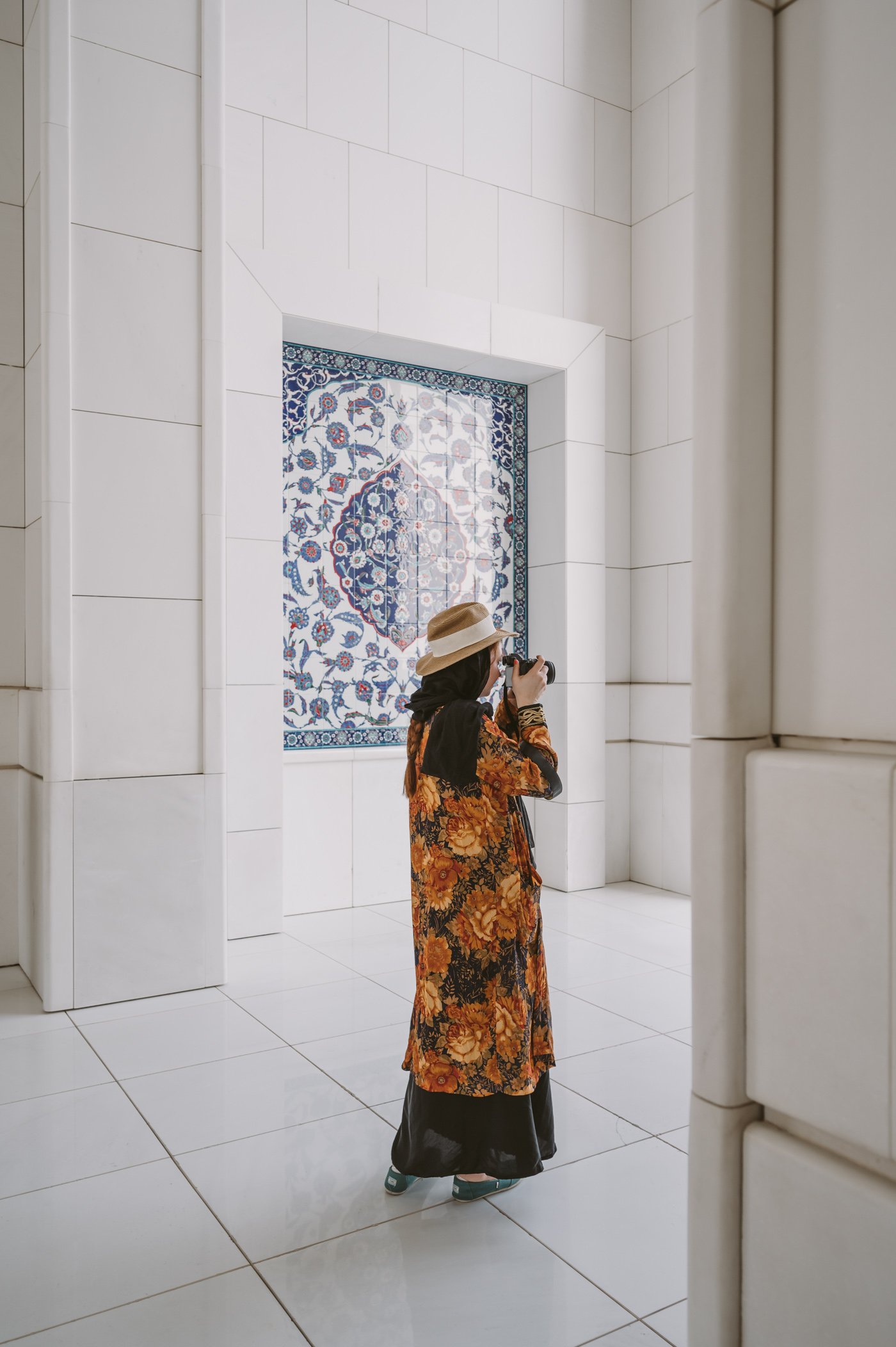 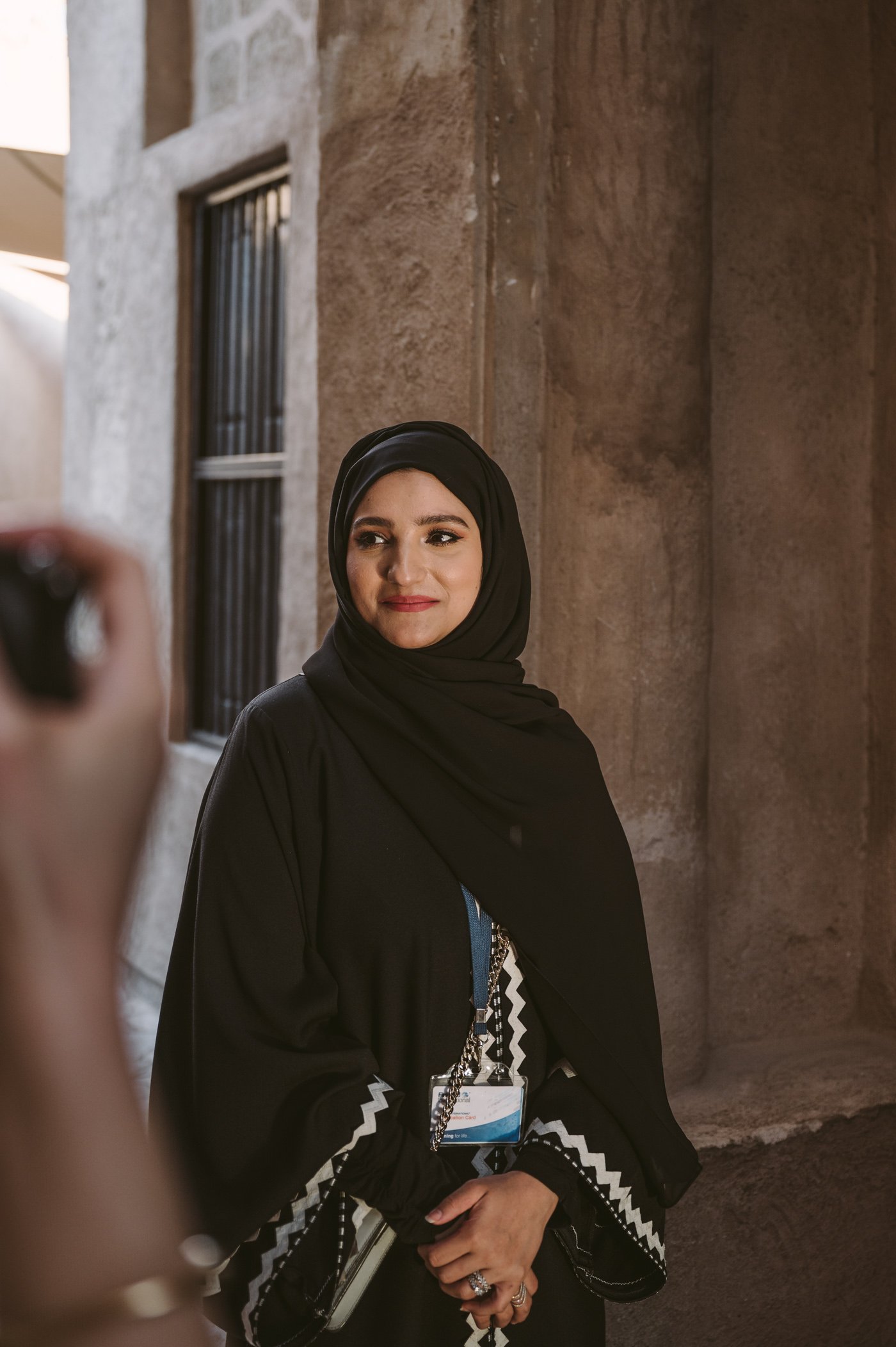 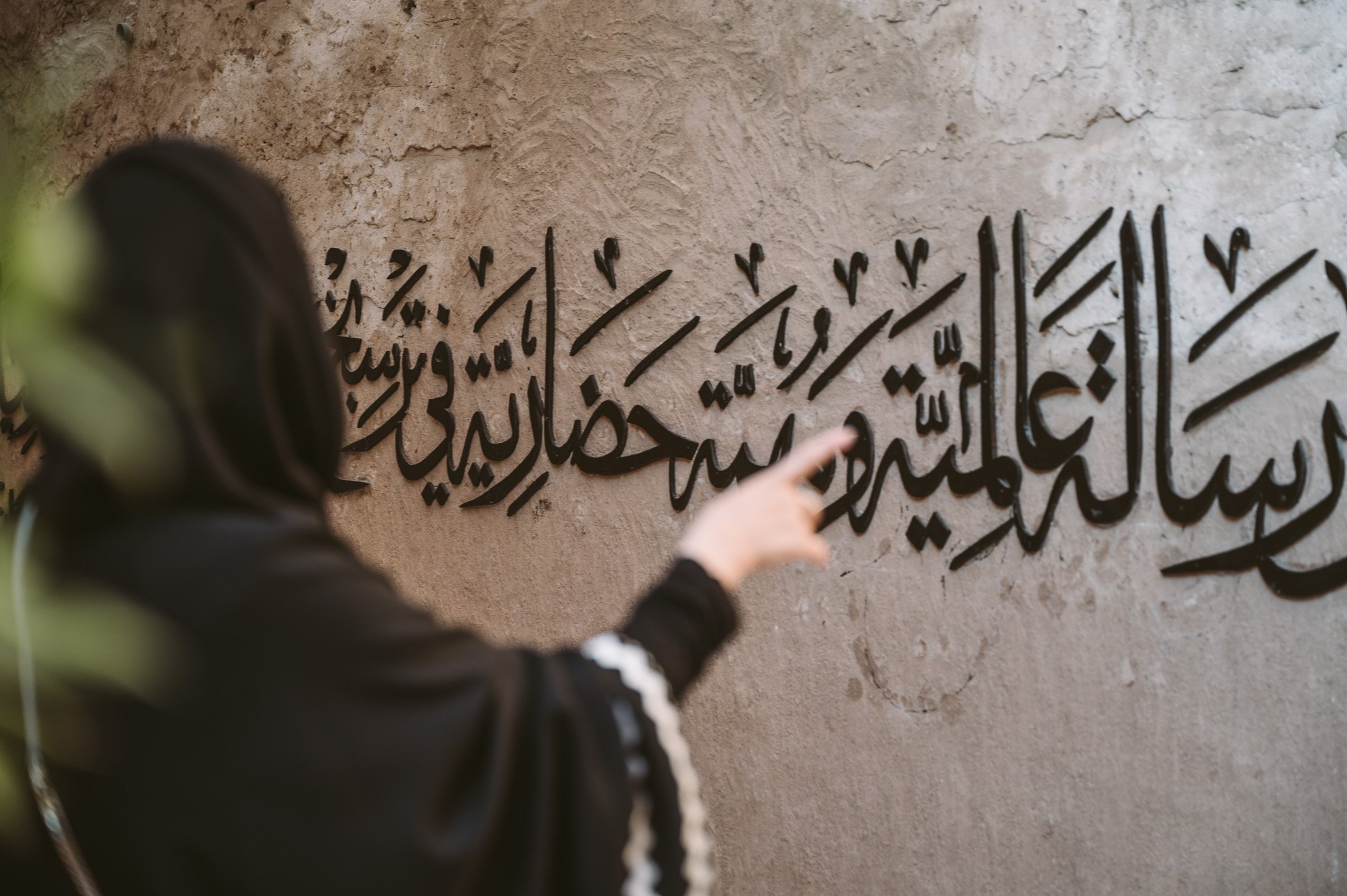 We met up with Emirati women to learn about their culture and discuss womanhood.

The women of Dubai

To do things a bit differently from the start on, we don’t stay in downtown Dubai among all the high rises, but choose to be based in the North close to Dubai Creek and the Al Fahidi neighborhood, which is also called “Old Dubai”. Here Dubai has still retained a bit of it’s historical flair. Until they found oil in the 1950s there wasn’t a lot happening here – except for merchants and pearl fishers, who had settled in what was the original Dubai. Today Dubai has changed a lot, not just appearance wise, but also culturally. But how do women in today’s Dubai live? 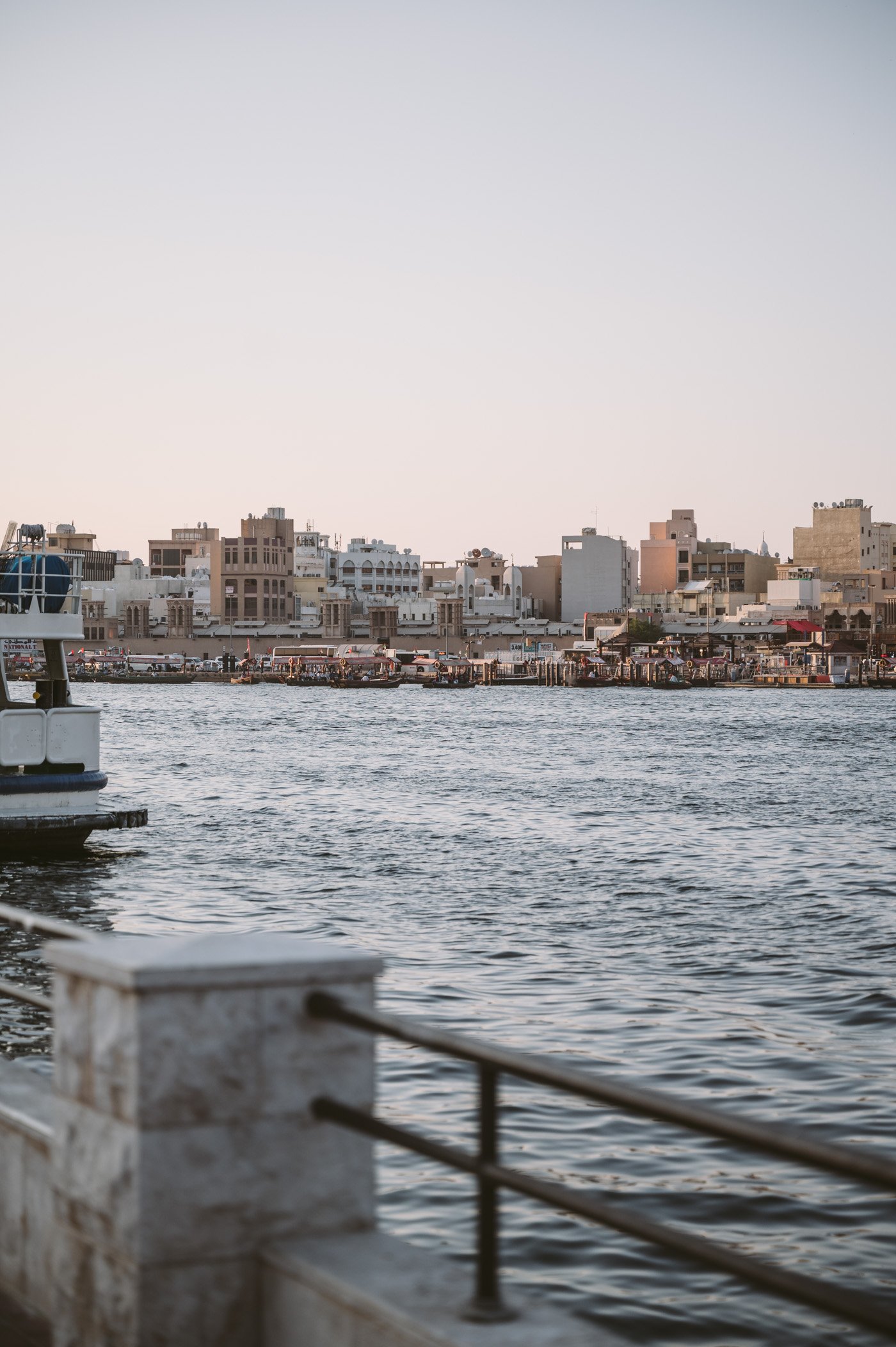 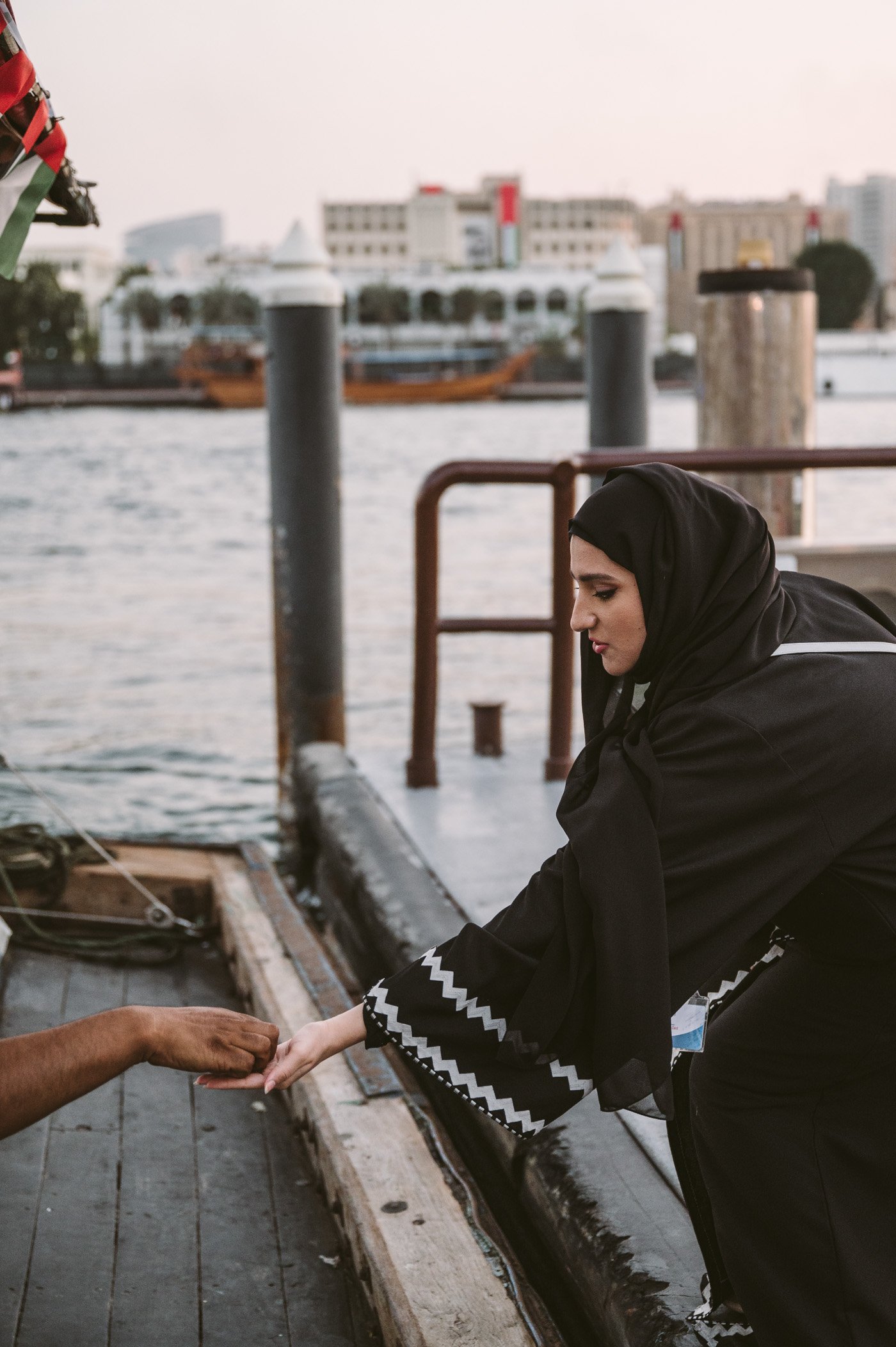 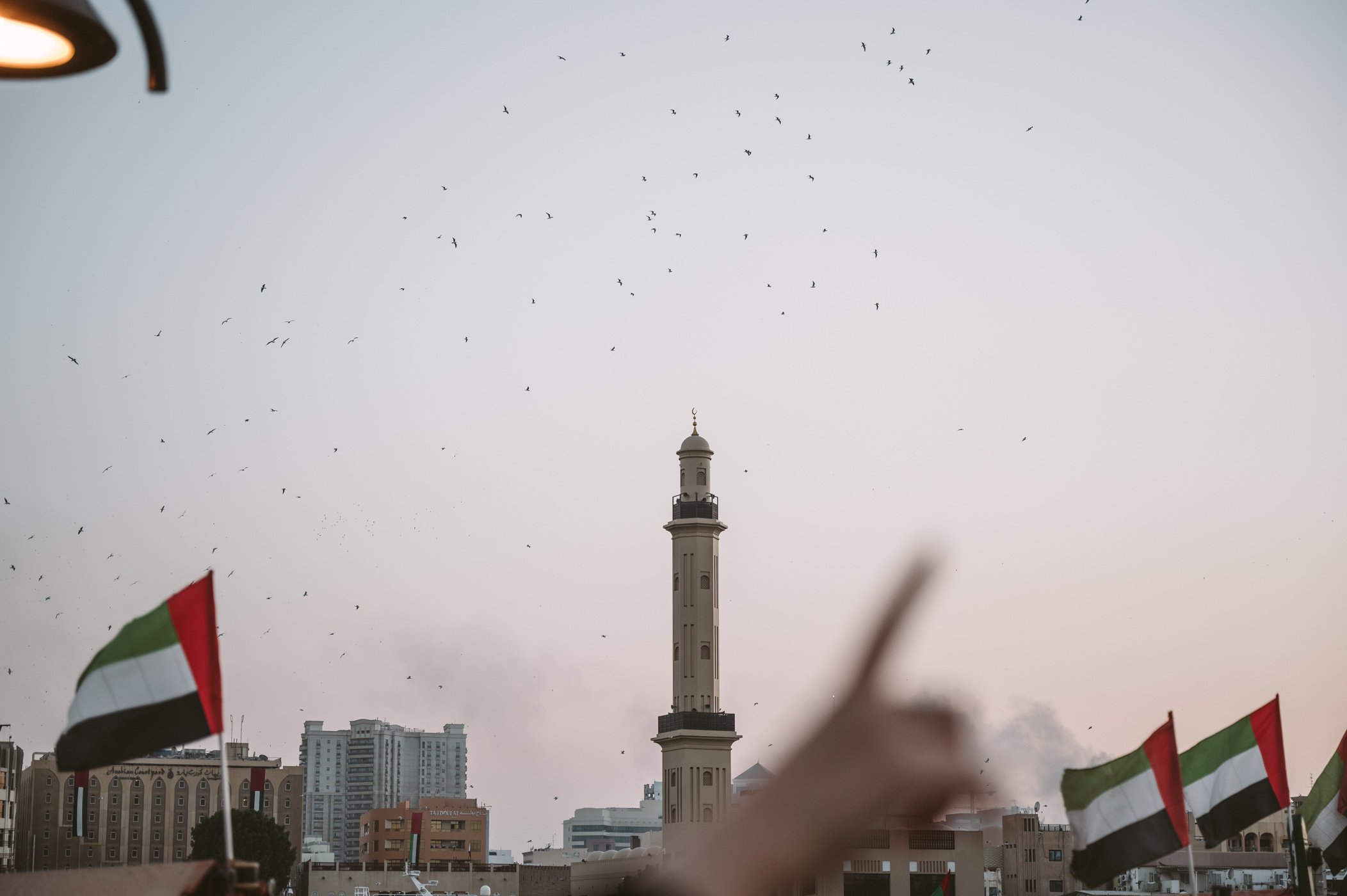 Our first impression of Dubai was through the eyes of a local on a walking tour with female founded “Emirati Kashtas”.

To kick things off we take a walking tour to discover more about Dubai’s history together with “Emirati Kashtas”, a local tour company founded by two sisters. Heba bin Redha and her sister want to give visitors a chance to get in touch with real Emiratis (only about 10% of the UAE’s population are actually Emiratis – and even less work as tour guides). Their aim is to create a space for cultural conversations and exchange – especially among females. And Heba does all of this next to her regular job as fraud investigator in the finance sector. 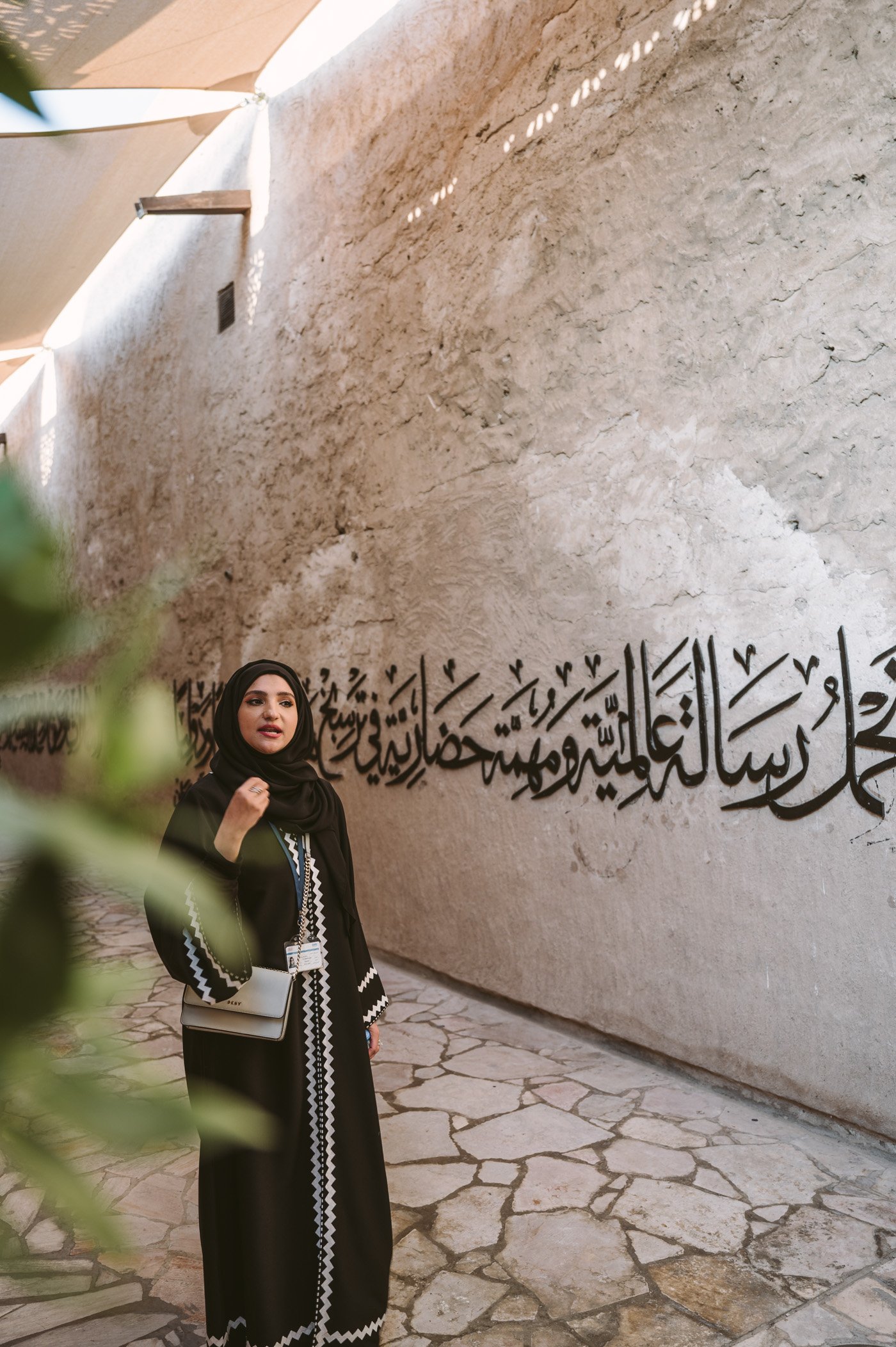 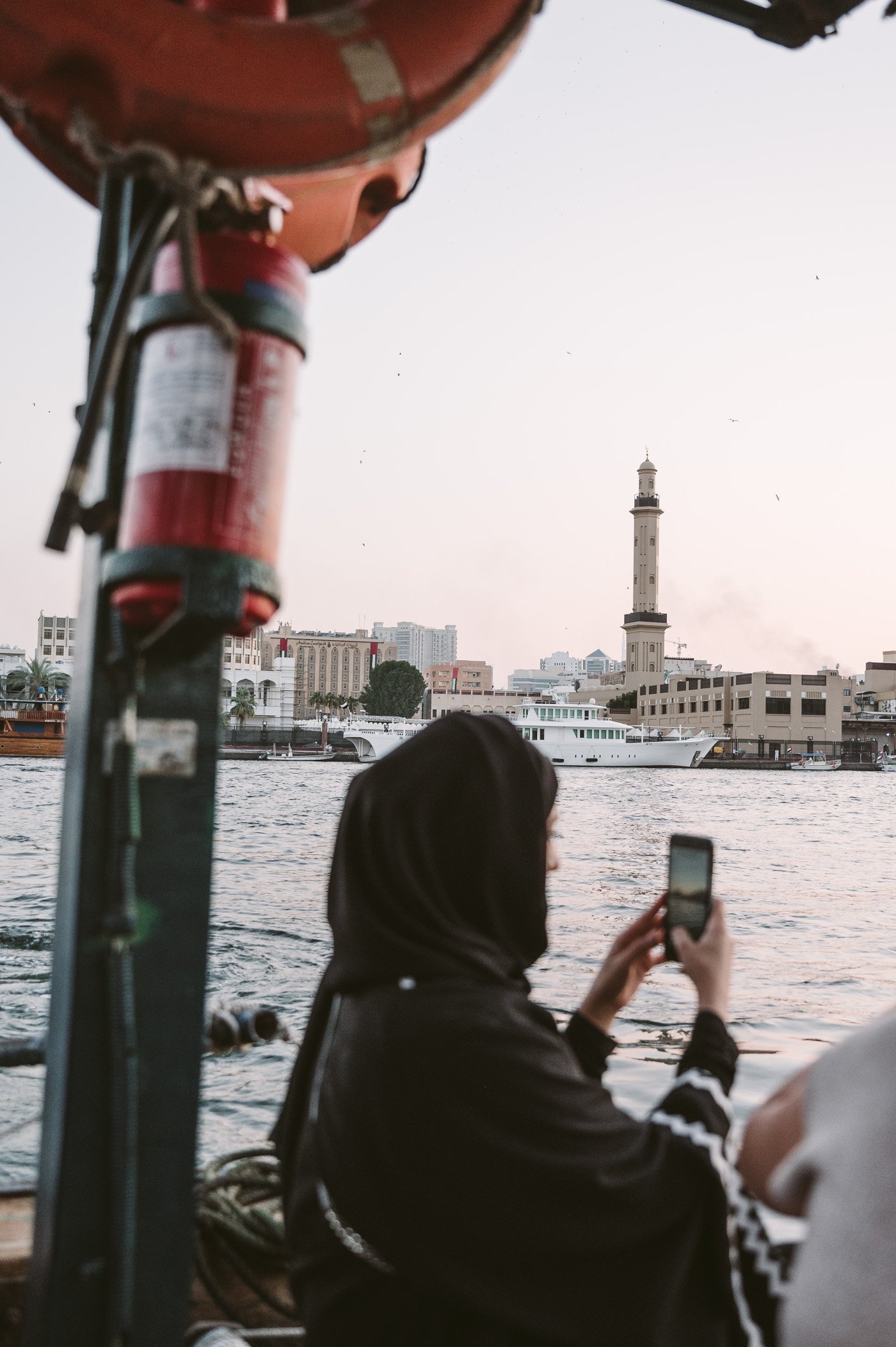 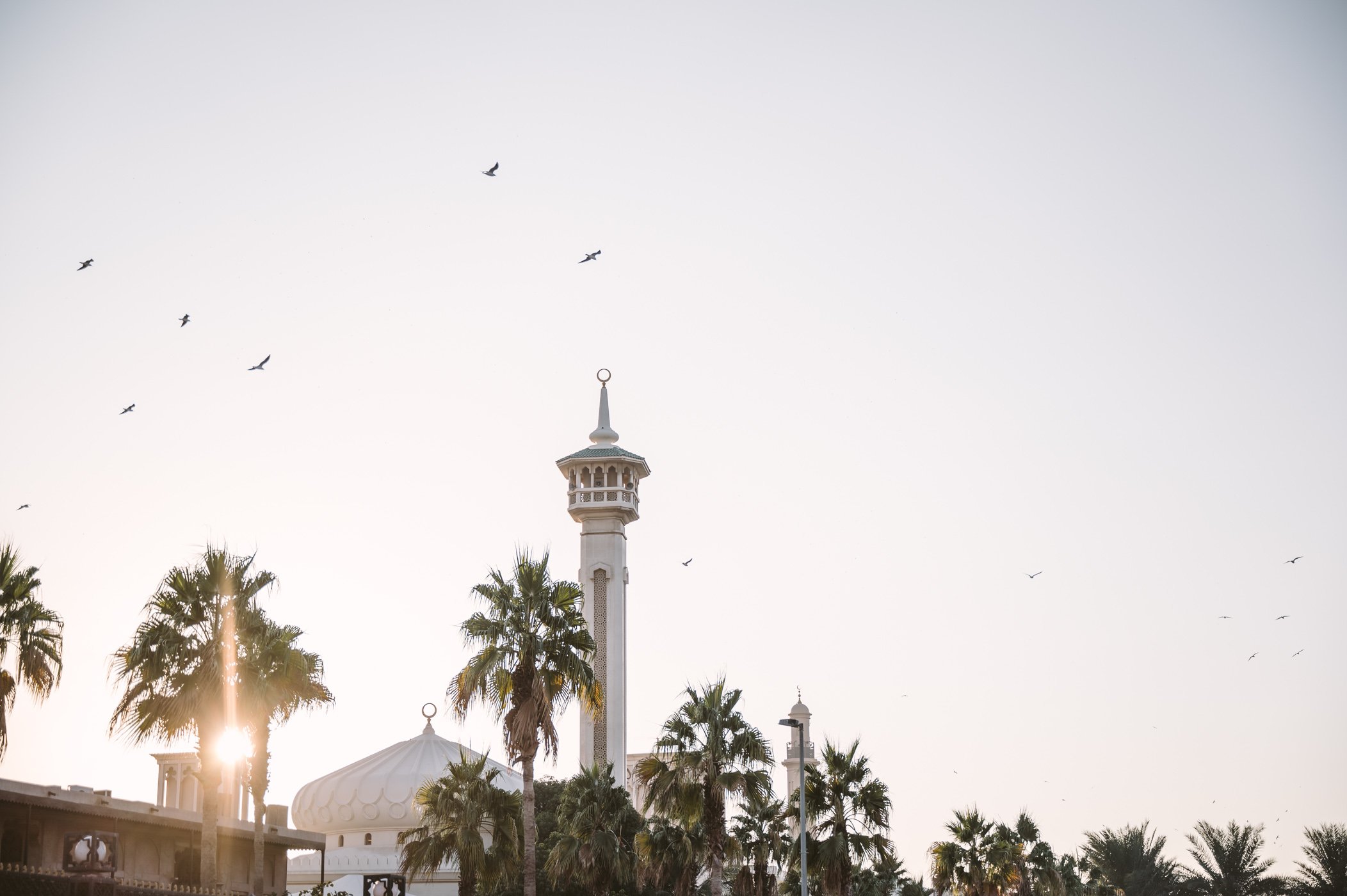 When asking Heba about her views on female rights and gender equality in the UAE her answer comes easily. She not only feels empowered, but even more powerful than the men in her society. Surprisingly to us this turns out to be the most common answer we get from Emirati females. They proudly stand by their country, their culture and history while applauding facts like that now more than 50% of ministers are female in the UAE.

Heba manoeuvres elegantly through the bustle of Dubai’s souk, while she equally elegantly steers the conversation between us. The only man, who is part of our tour, doesn’t even notice that she didn’t shake his hand as a greeting. She swiftly covers her wrists if her abaya slips up her arm. And just seconds later she politely asks a group of men to step back, as we are first in line to climb aboard the small wooden boats, that bring us over the canal. 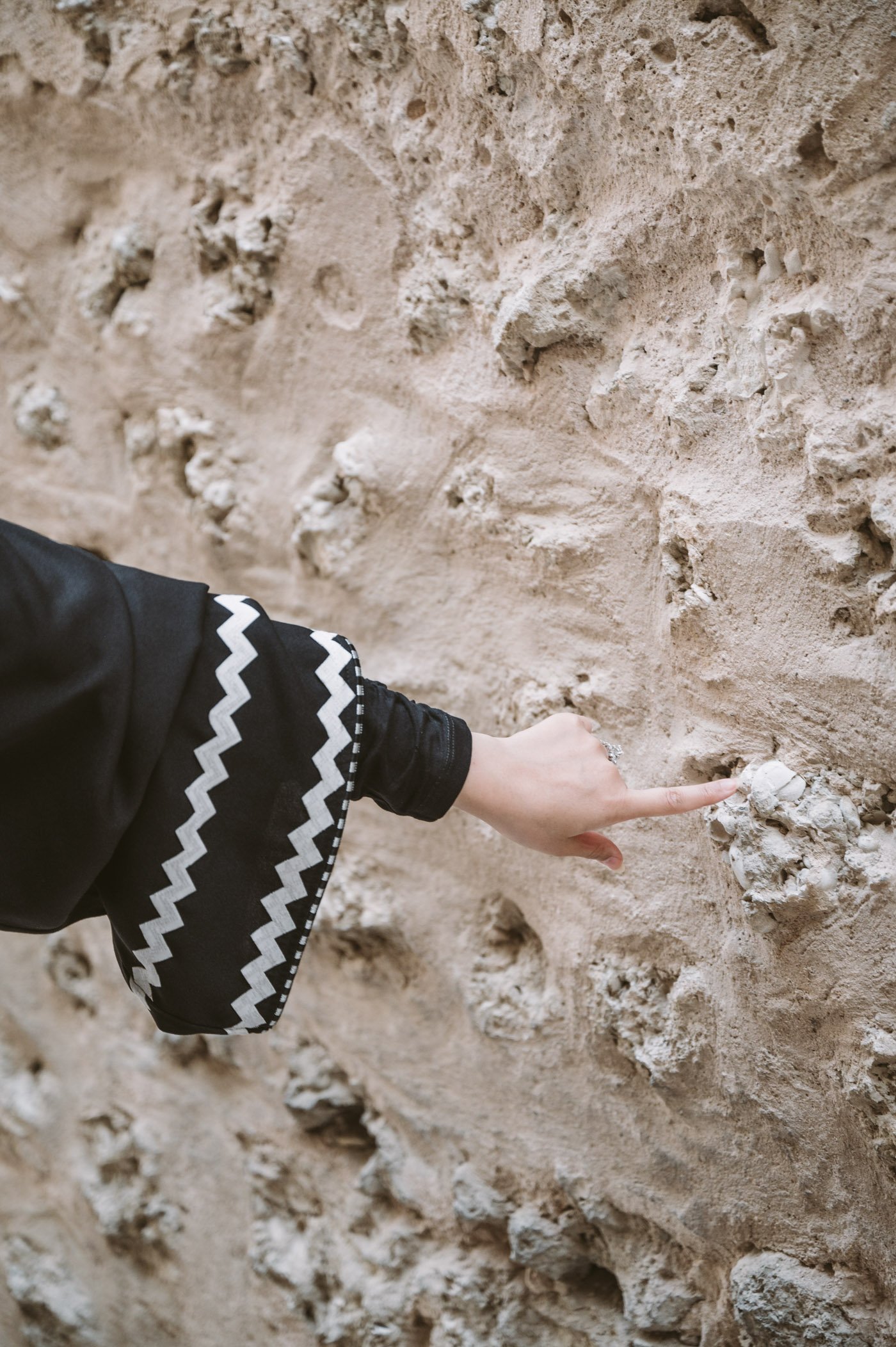 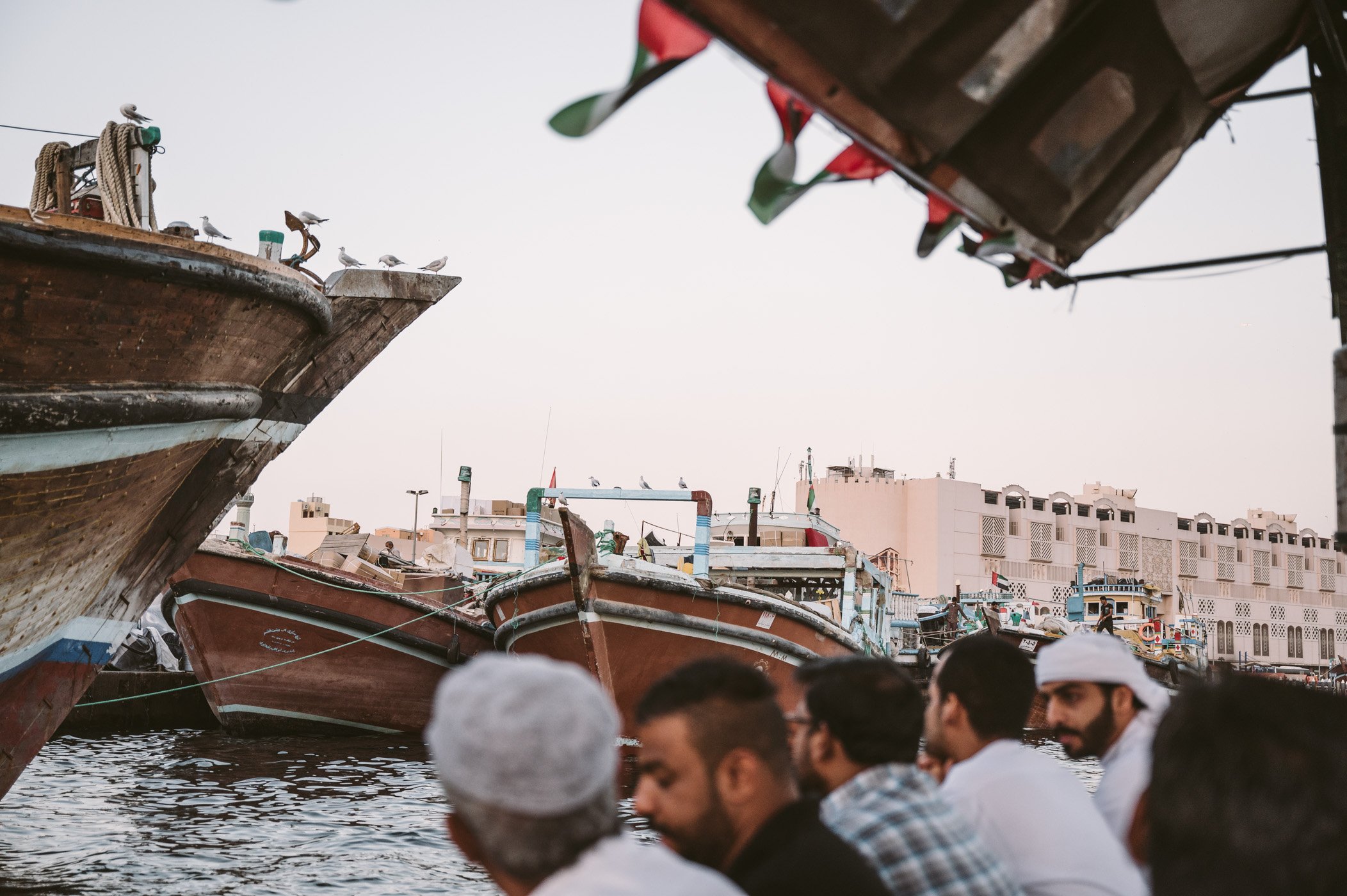 Heba shows us around the busy Creek area and the Souks of Dubai – dressed in her formal Abaya and Shayla headscarf.

The next day we join a cultural exchange breakfast in the SMCCU, the “Sheikh Mohammed Centre for Cultural Understanding”. This is where we meet Fathayah Younis – a 27 year old Emirati woman who studied biotechnology, but now is a presenter for the cultural exchange program. We ask her why and the answer is simple – there just aren’t enough biotech jobs in Dubai yet, although she would prefer to work in her field. Since 3 years she now works at SMCCU – bringing together different cultures for an open dialog. 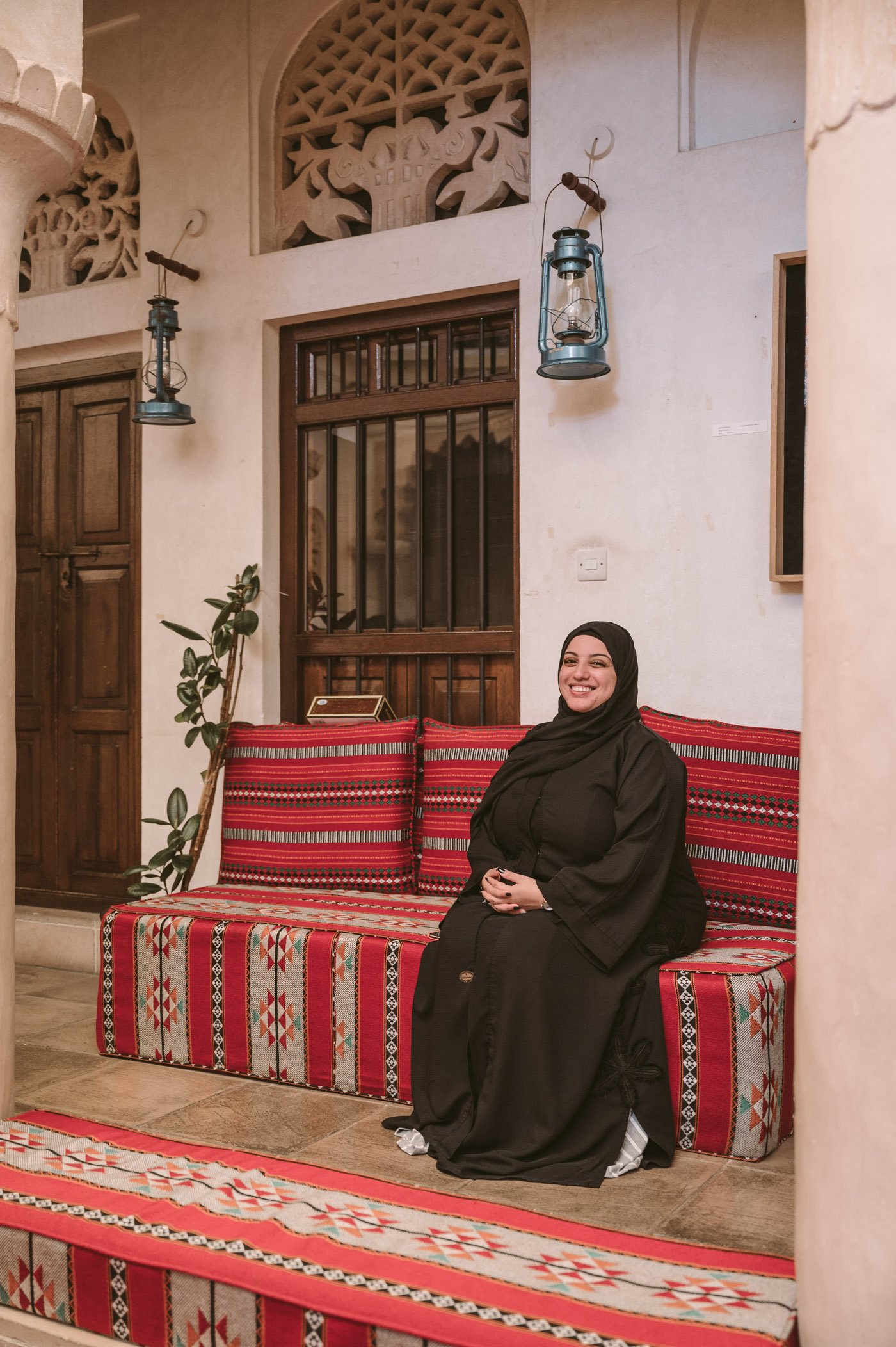 Fathayah is a cultural exchange presenter at SMCCU.

The purpose of the SMCCU is to sit together and enjoy food in one of the original merchant houses’ courtyard and get into a discussion with locals. Fathayah introduces the session with “no questions are forbidden” – so off we go and slowly steer the debate away from how tomatoes grow in the UAE towards more sensitive topics like contraceptives and abortion rights for women. 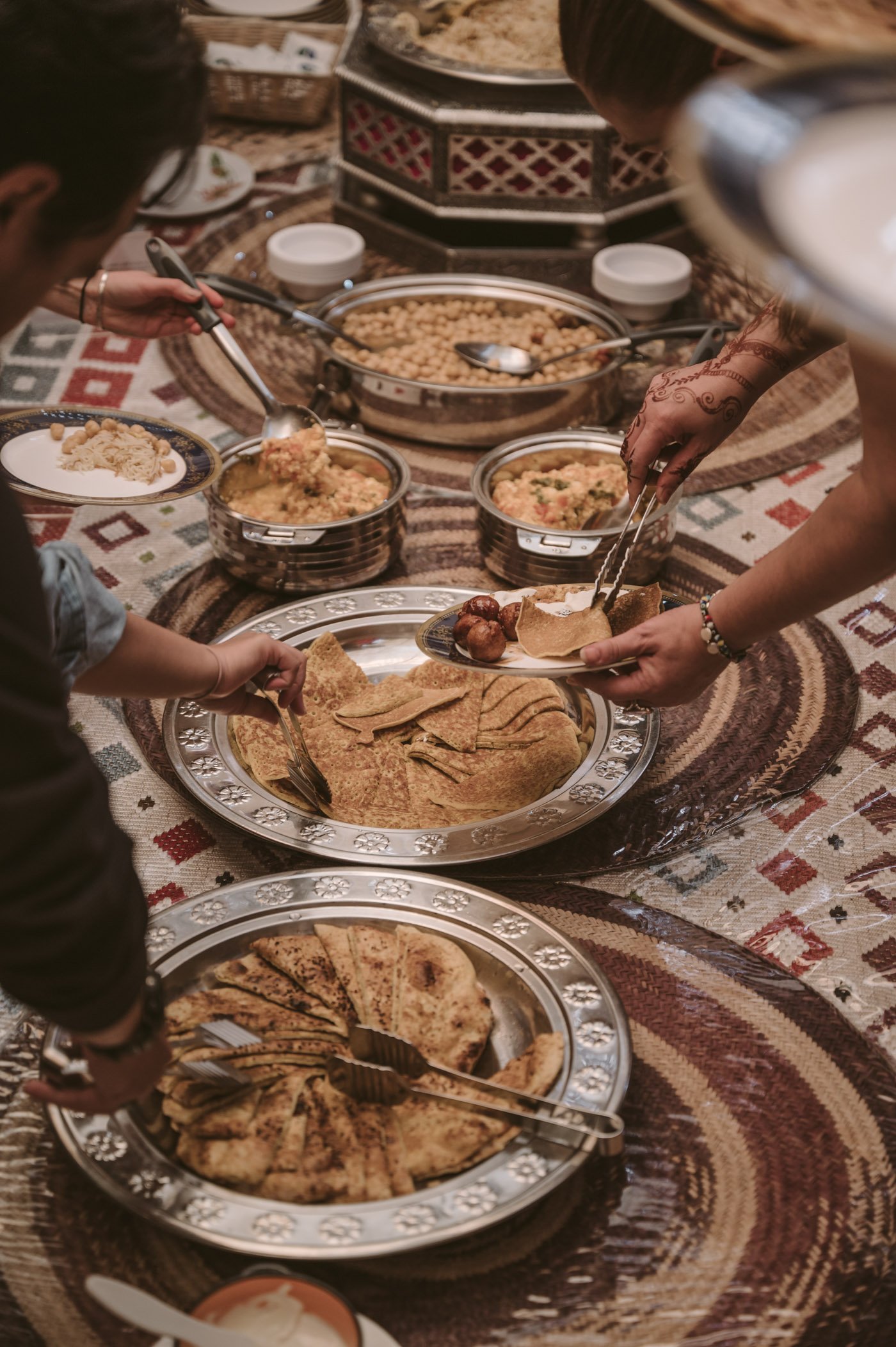 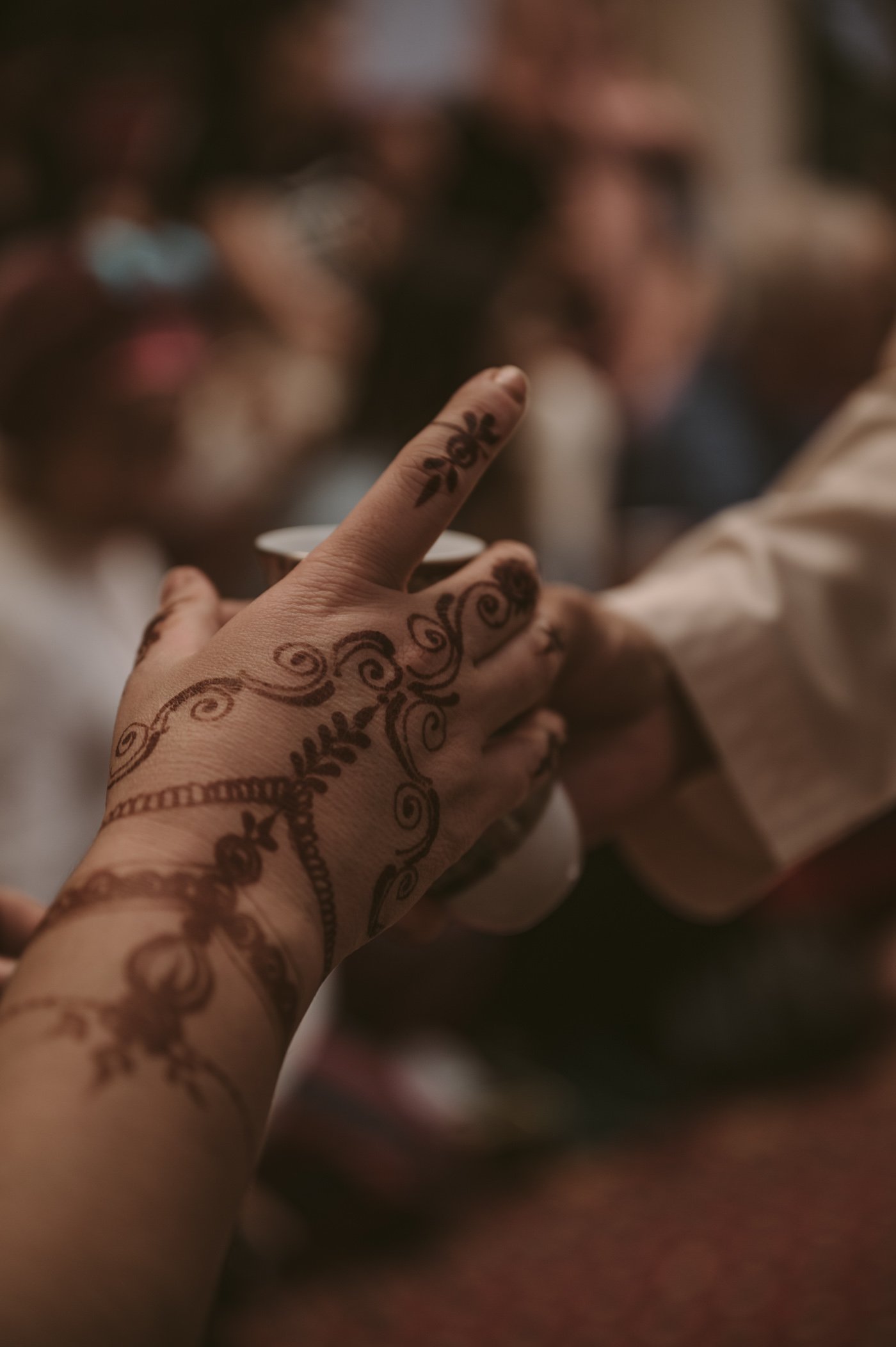 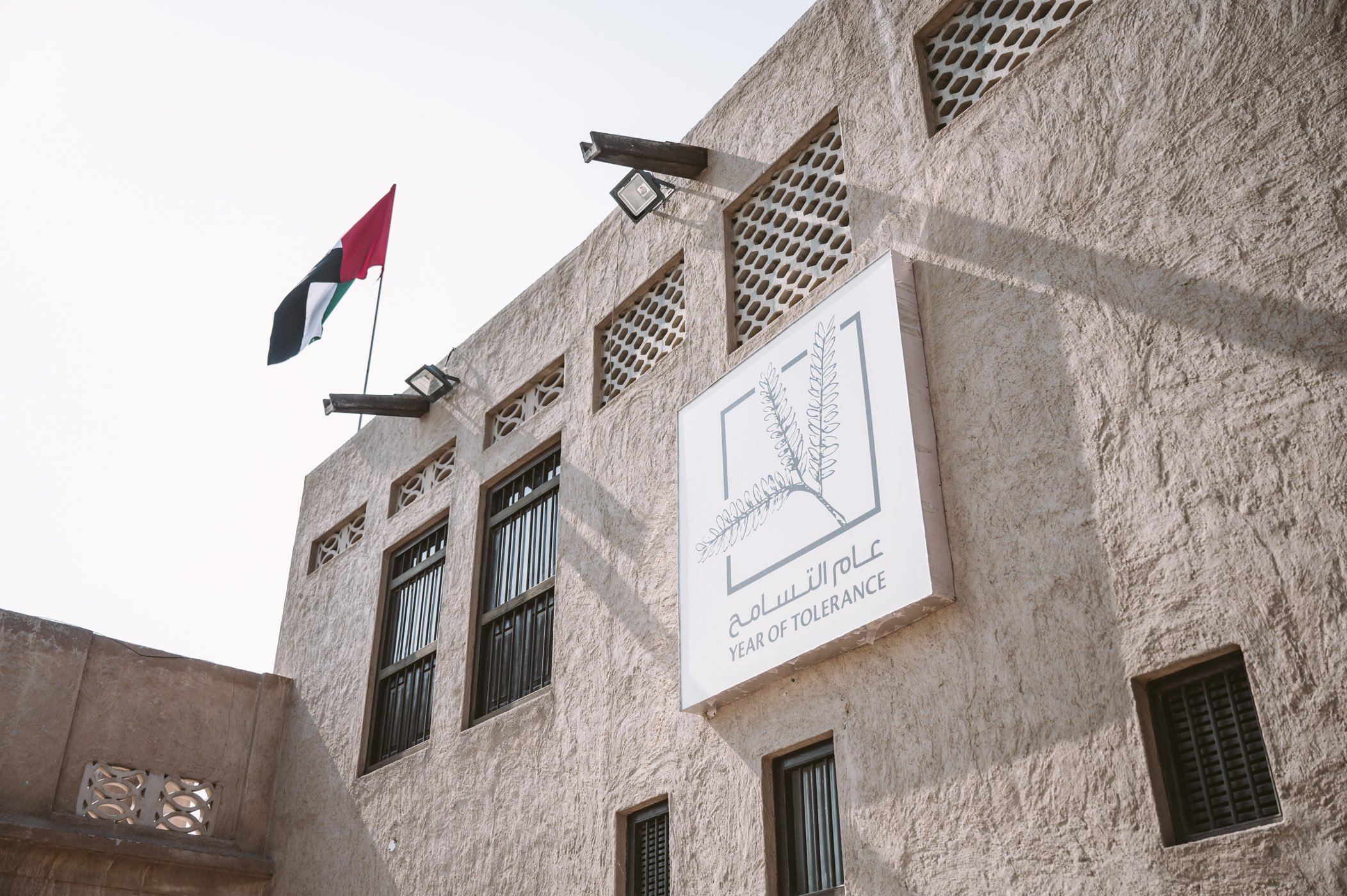 At SMCCU the “Year of Tolerance” is advertised – as part of their cultural exchange program.

Fathayah patiently explains how her culture views children as gifts directly from god. She explains her views of the Koran and why family is so important in the Emirati culture. She tells us that there are no foster homes in the UAE (and no elderly homes either), as the Emiratis care about each other. In Fathayah’s words:

“Here in the UAE we women are treated like princesses. We are more privileged than men.”

We meet a strong woman with strong beliefs – and still leave with a sense of discontent. How come it was so hard to get into a deeper discussion, a more critical approach? Do we maybe impose our views of what female rights should look like on a society that works completely different than ours? 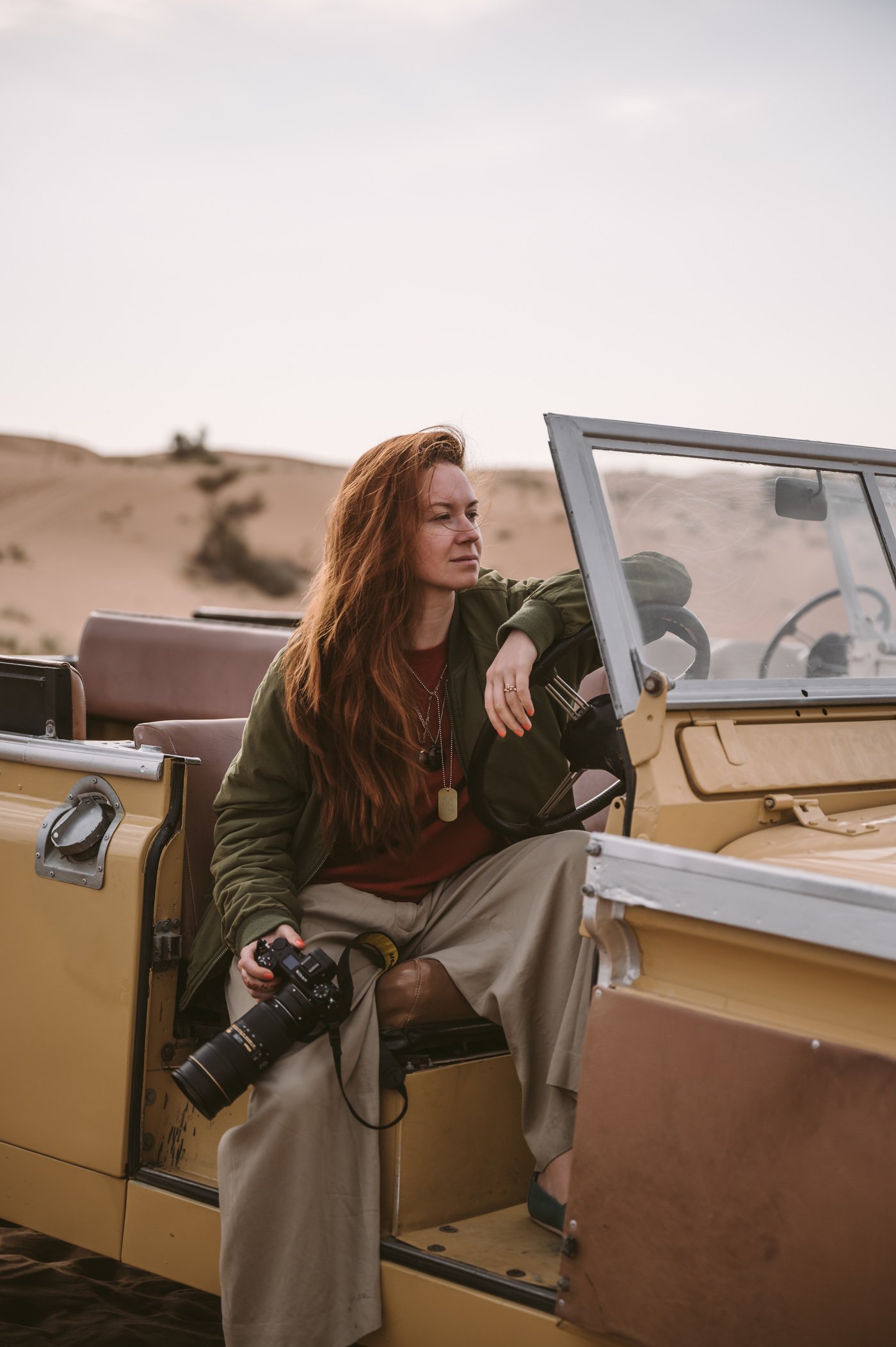 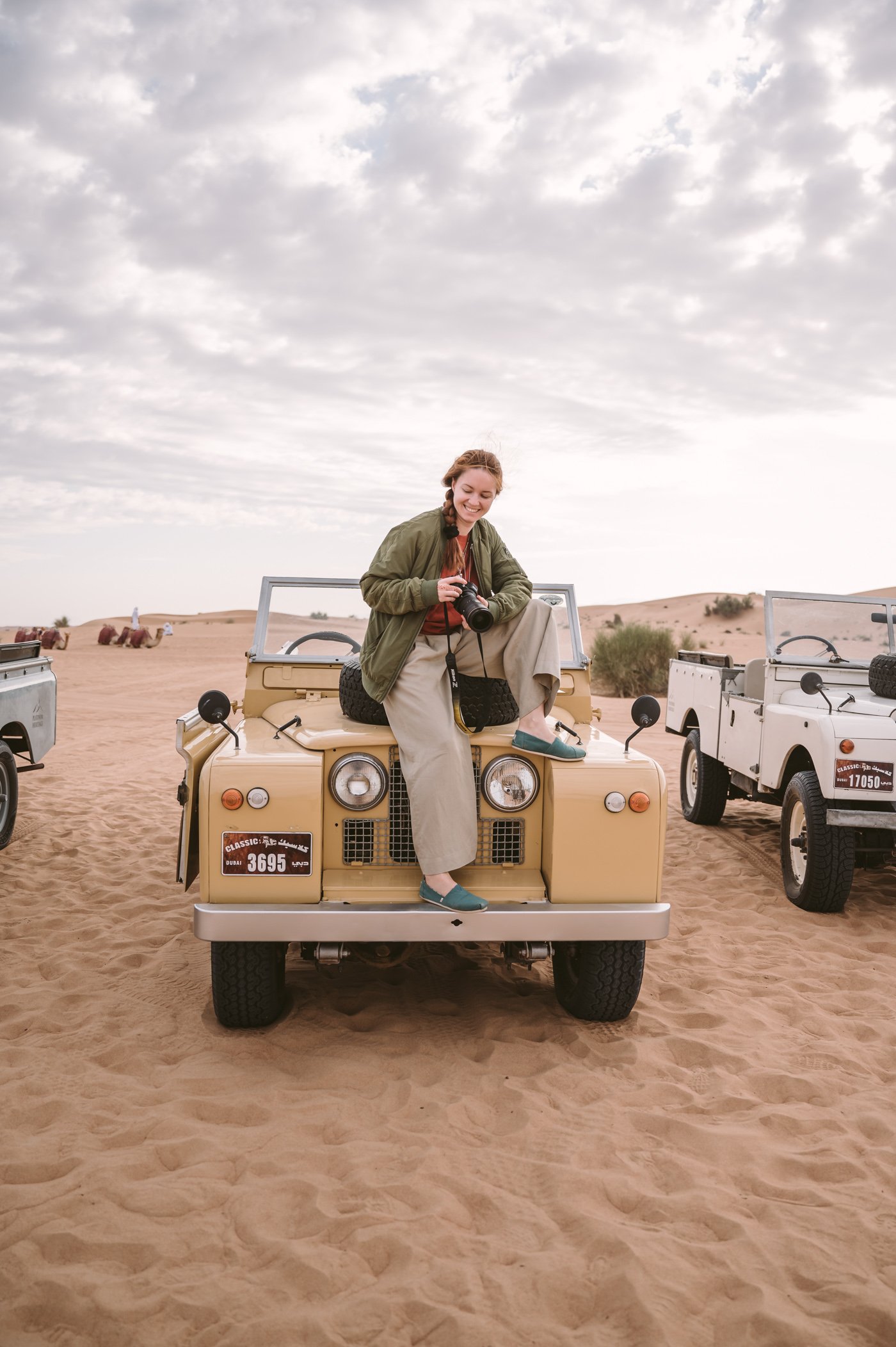 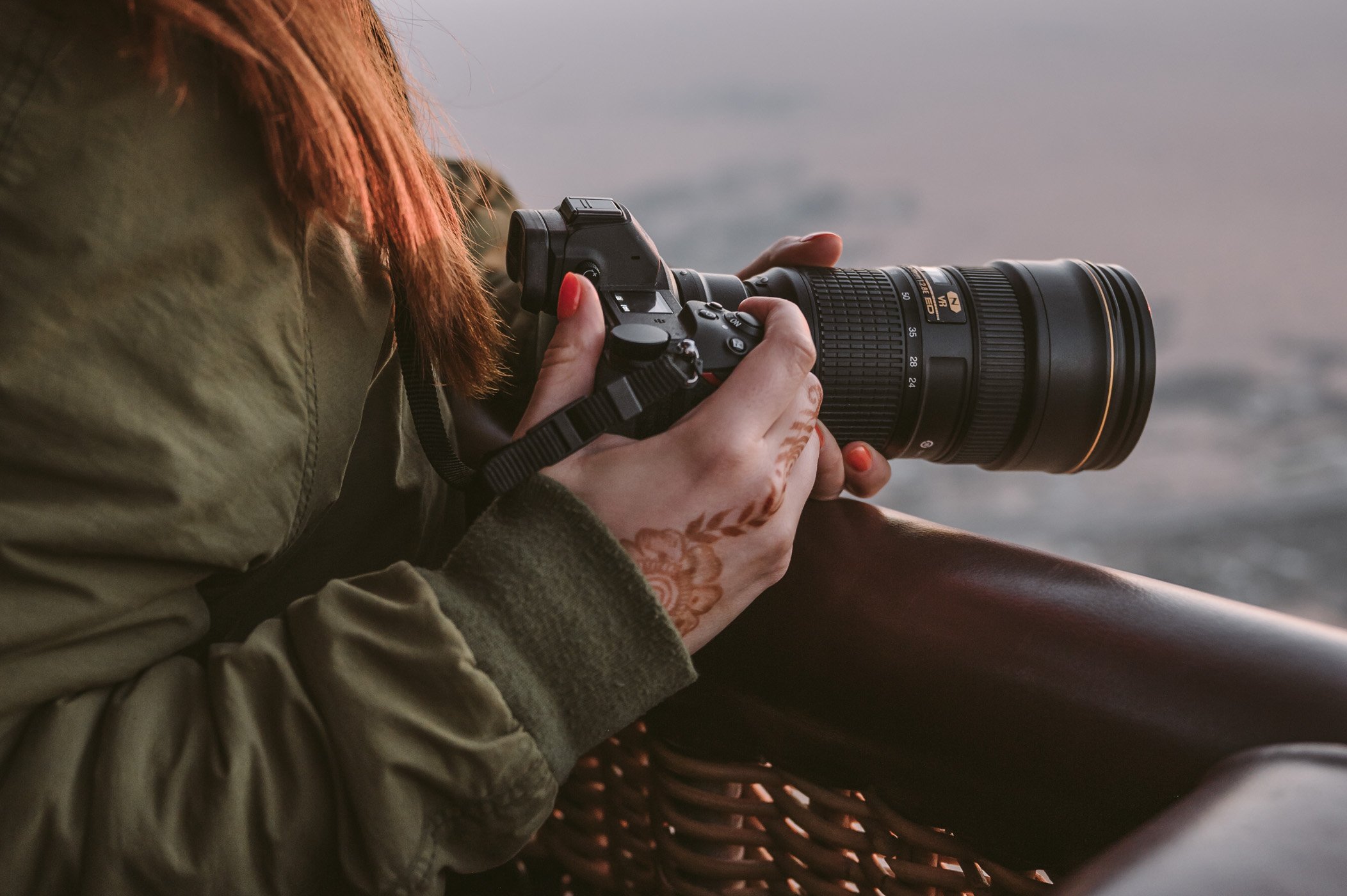 While we explore the desert in Dubai we ask ourselves:
“Are our ideas about female empowerment so different from women in the UAE?”

And then we meet Huda bin Redha. She is a 27 year old lawyer and photographer. Her photos and interview are also part of our Bell Collective book, which was released recently. We couldn’t wait to meet up with her and discuss some issues on a deeper level. From all the women we meet on this trip Huda seems like the most open and critical one. She says she was always the rebel in her family and that she got that from her Egyptian mother.

She drives us into the desert with her car, flies her drone over the sand dunes and tells us that she still isn’t married – which isn’t the norm for women her age in UAE. Huda is what you can call an independent power woman. 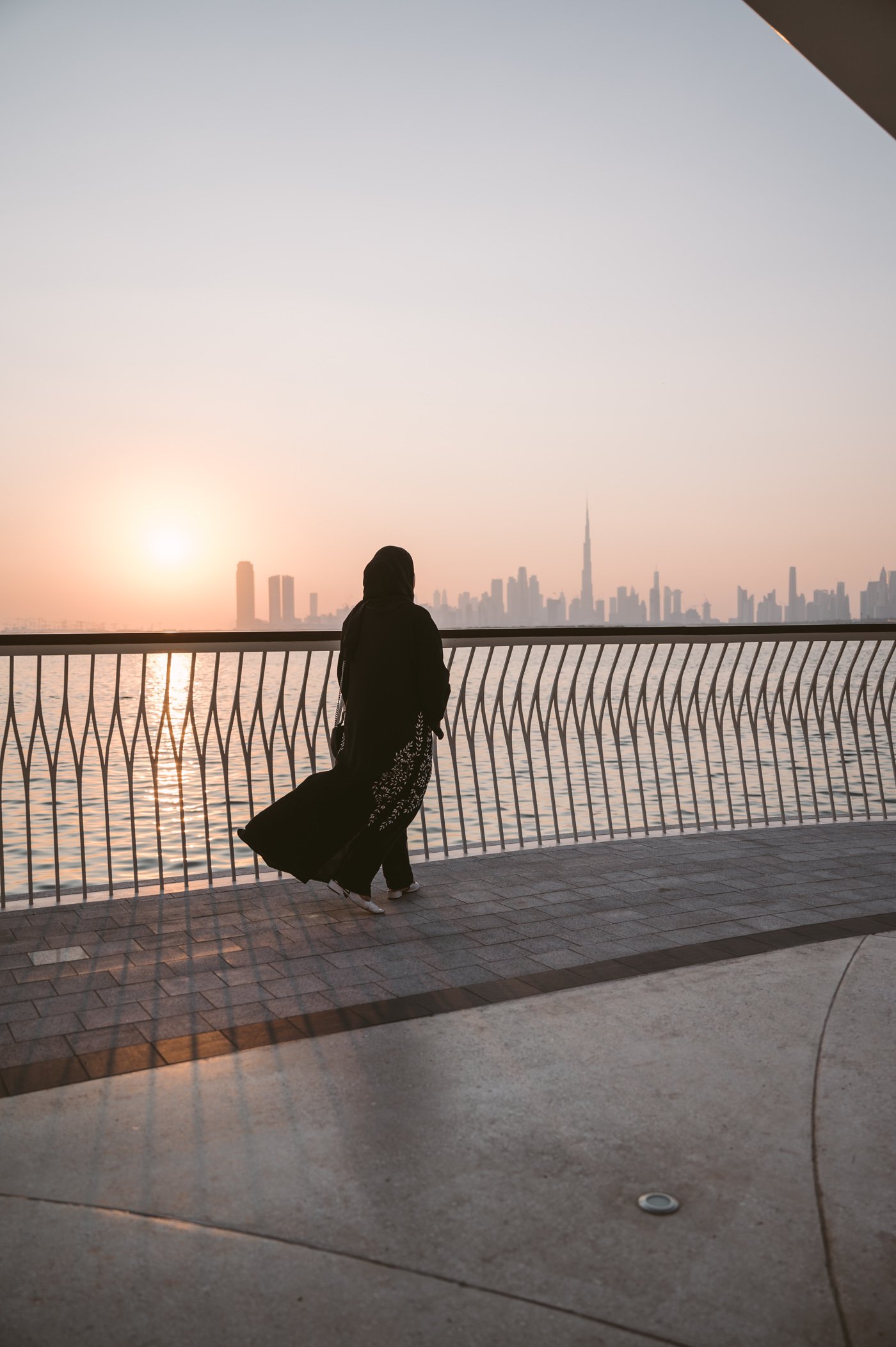 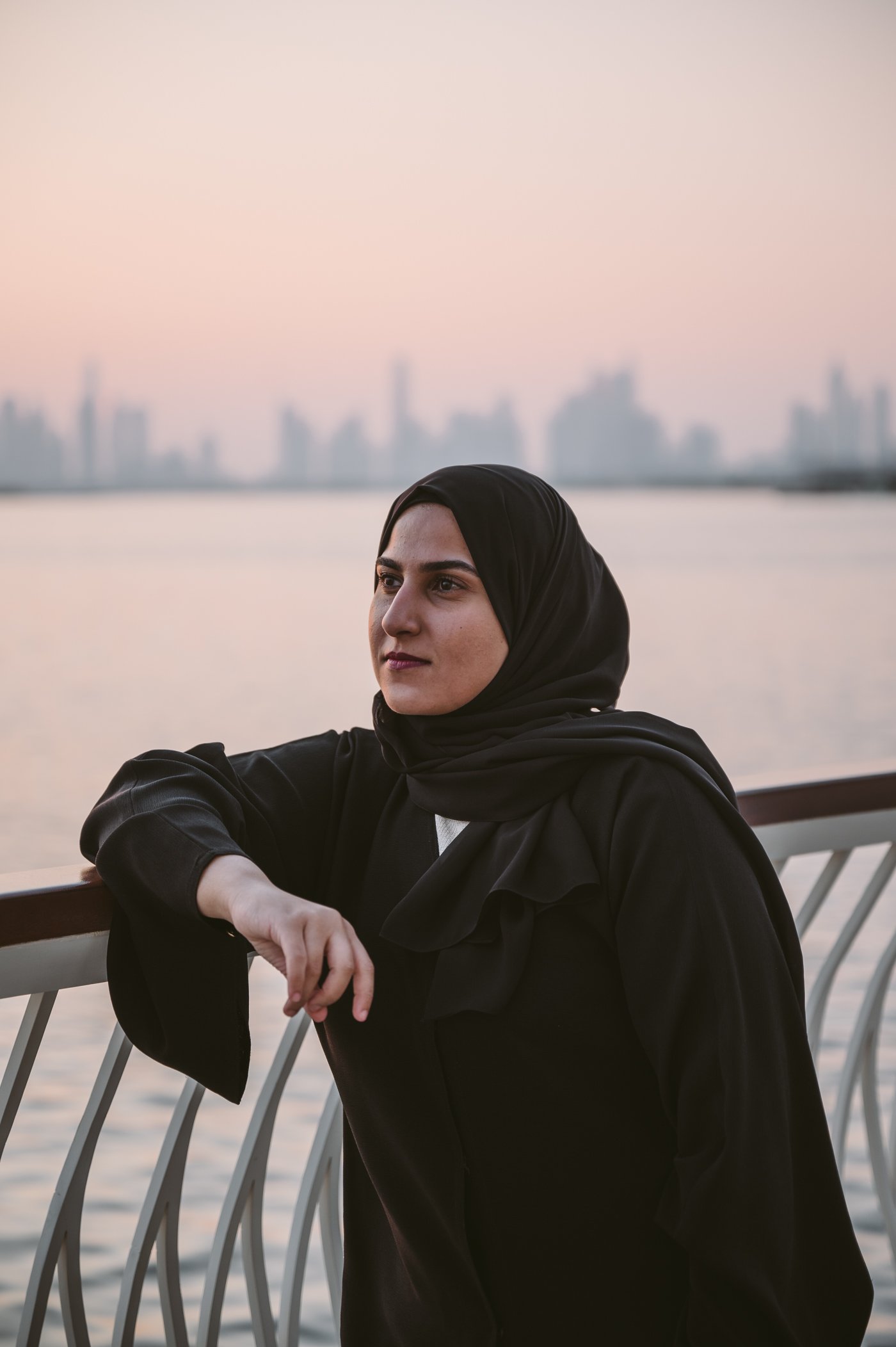 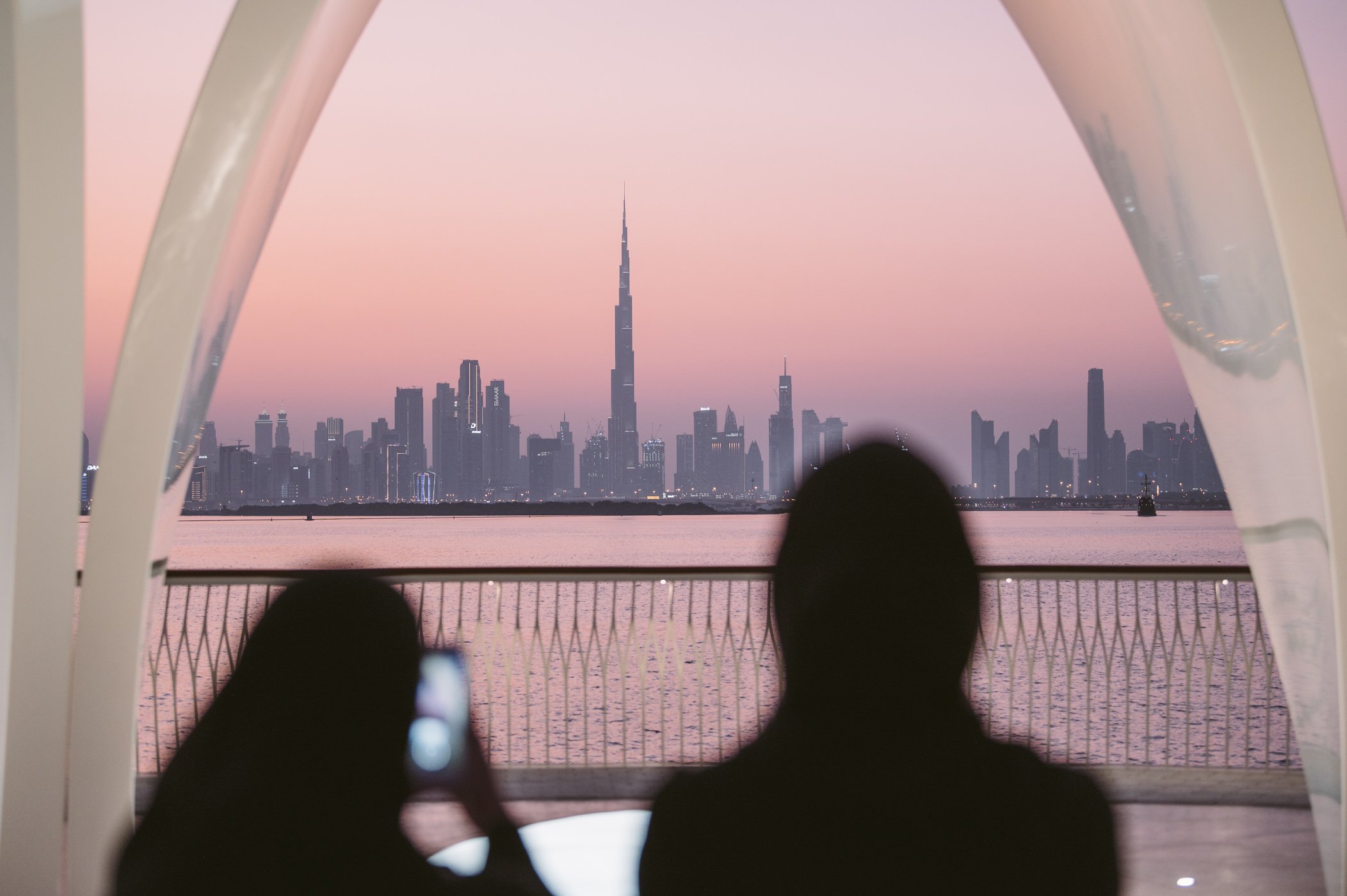 We are impressed. And when we leave we feel that Emirati women maybe simply don’t want to consider themselves oppressed or less privileged than men. Unless they truly are oppressed. While the country – driven by it’s multicultural society with over 200 nations living together – becomes increasingly westernised and also liberal, family is still the driving force for any women’s fate in the UAE, it seems. 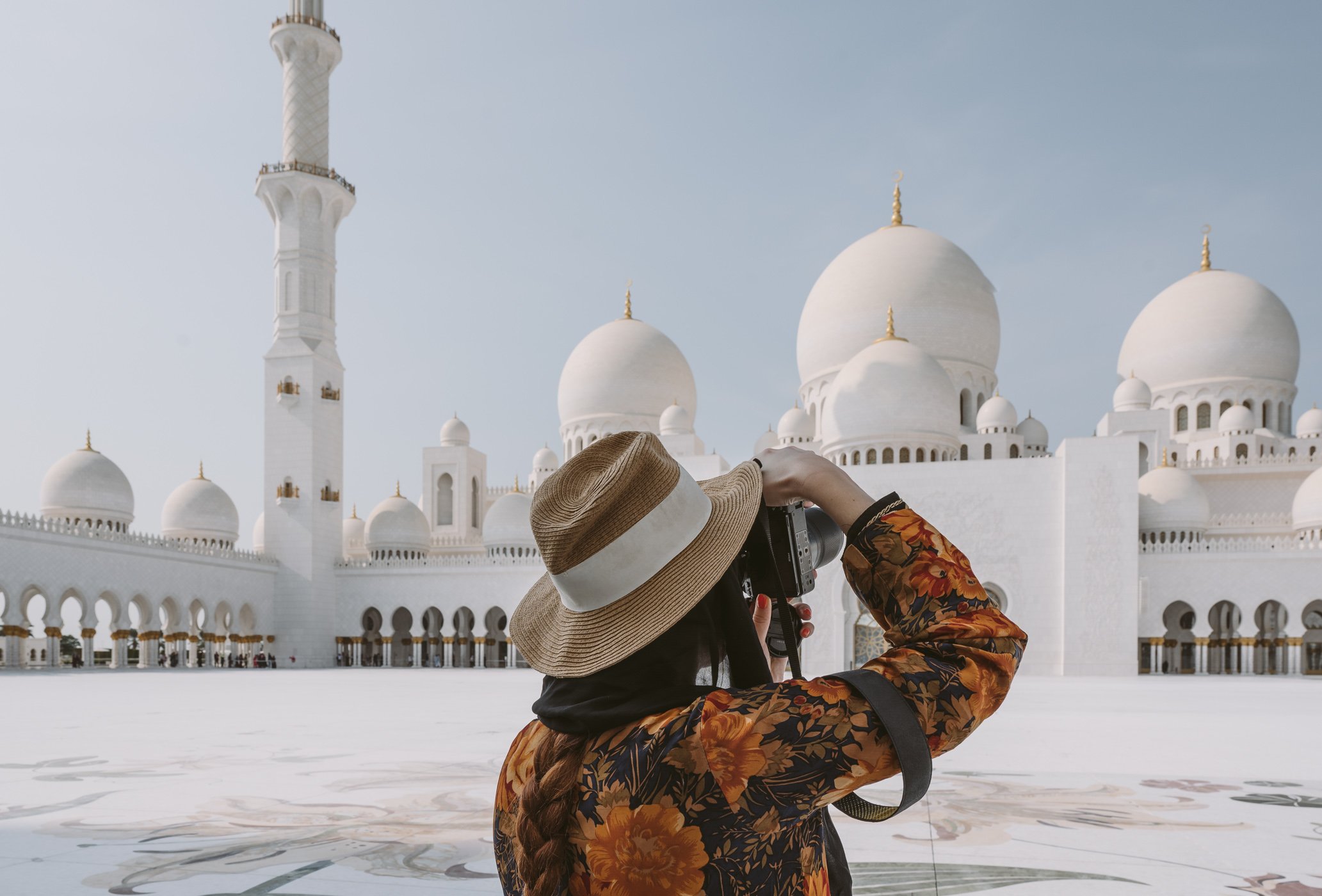 If your Emirati family is conservative, you will definitely have less rights as a woman than Huda, who grew up in a liberal family. As ever so often, there are no easy answers to our questions. Did we find out how women live in the UAE? No not in general. But we uncovered some facets of all the shades of grey that exist in this country – and our world respectively.

Make sure to follow @bellcollective on Instagram for some short interviews we did with the females we met in Dubai! 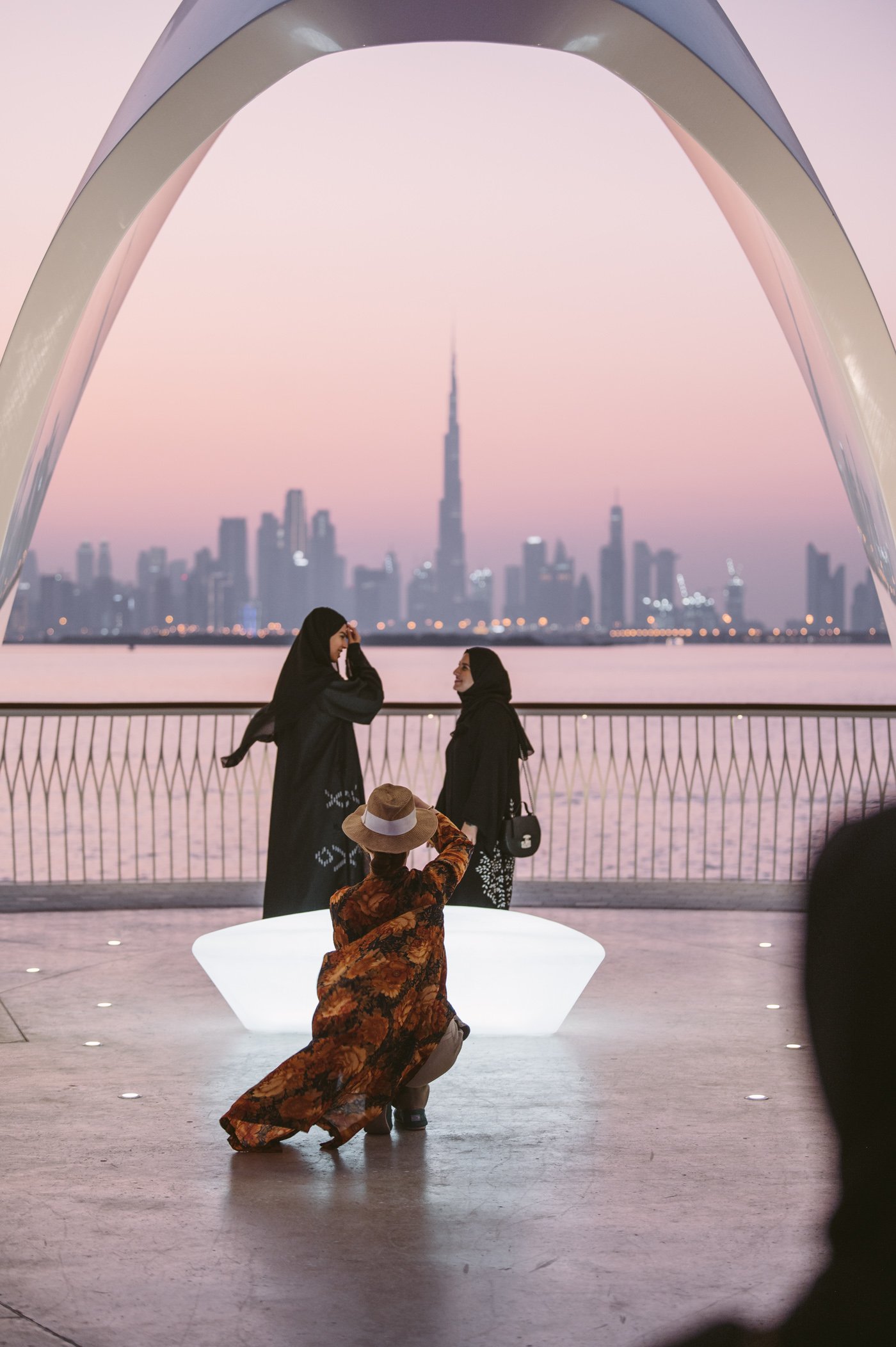 A huge thanks goes to our partners Nikon Austria and Nikon Germany for supporting Bell Collective and our trip to Dubai. All the photos were shot on a Nikon Z 6 mirrorless camera.